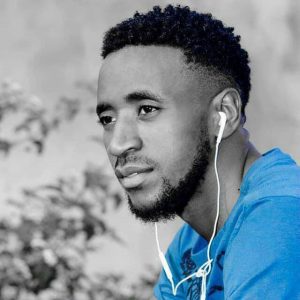 Omega Carlos Mtine was born in Chipata District of Zambia. He started singing at a tender age in a gospel singing group called the ”Mellody of praise” but his professional music career started in 2013 when he contested in Season 2 of Dreams Singing Competition where he came out first runner up. Omega recorded his first single called ”50 years” a tribute to mother Zambia which was massively aired on ZNBC. In 2014, he took a break off music when he went to college to pursue his nursing career. In 2017, Omega joined the Music for Change family, got back in the studio and did a song with BFlow called ”Loyal” which received fair airplay & opened other doors and connections.

Omega also sang in uncle Rex’s band for a while & later, decided to be a stand-alone artist under Music for Change.