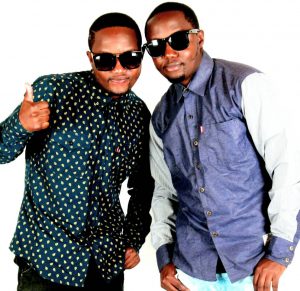 Since their birth in kabwe, the identical twins D2 have been inseparable in their everyday lives. While their parents named them Dennis and Derick Mulongoti, they preferred to be called D2 and took their music career as the first option in their young lives. By the year 2006, D2 were already hooked to the music industry after being inspired by R&B; artists like K’Millian, Hamoba, Mainza Chipenzi, Bob Muli and Winston Moyo.

In 2007, D2 were already turning heads with their debut album titled Civilian Soldier which had smash hits like “I‘m a Soldier” which featured their mentor B’Flow and “Nimuzanga Chabe” featuring K’millian. The two songs made their way to the electronic media including Muvi TV. The “Civilian Soldier” album featured other artists such as Bob muli, BoB Mabege, Tommy D and Rusha.

After a 5 year break off mainstream music, D2 returned to the stage with back-to-back hit songs like never before. They first released “Inyeleti” featuring P Jay in 2014. The song was co-written by B‘Flow to raise awareness on the dangers of alcohol abuse. It enjoyed favorable spins on local radio and television stations. In 2015, they released ’‘Nalema”, a collaboration with heavyweights B1 and B’Flow. It became one of the most streamed Zambian songs in the diaspora.

In 2017, D2 collaborated with Drimz on the smash hit “Nangu Waliya”.
D2’s passion in the community is to teach their peers about HIV/AIDS prevention through music.